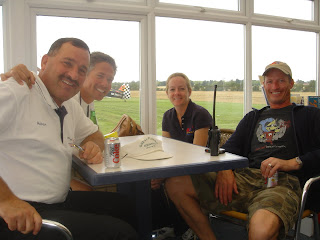 Robert, Goody, Vicki, and Jeff before their afternoon rotation 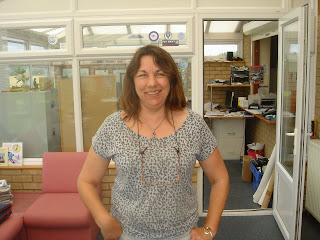 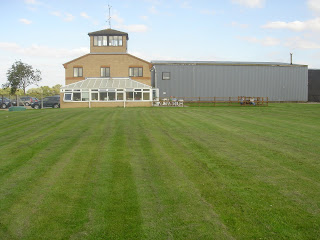 Monday afternoon, the team successfully and safely relocated from Dunkeswell to Silverstone, England. The pilots in planes made the trip in 40 minutes, while those of us on the road took slightly over three hours. The pilots where met at Silverstone and taken to the hotel, which is very nice.

After being asked to stop flying in Dunkeswell, the Contest Director, Steve Green, was contacted, and quickly went to work to find an alternative site for practice. He was able to receive permission from the people at a former WWll field south of Peterborough. This airport was named Glatton during WWll and B-17s were based there. All of the fields we have flown from are former Army Air Corps bases with a lot of history. So our plan was to fly Tuesday morning practice flights in the Silverstone box, then fly at the Flying Club Conington (EGSF) for the afternoon practice flights.

The morning practice flights went on schedule for everyone, except Debby. Debby is sharing Hanspeter’s plane, and the two of them were practicing at another field. Debby’s Silverstone practice time is late on Wednesday. By noon, we were ready to leave for Conington with Debby joining Hanspeter. Conington is about 30 miles East of Silverstone, or 15 minutes by air. It was about an hour and a half by car. We arrived and began the practice rotation after a briefing from Julie Churchill.
Now the day got “interesting”. Three flights into the rotation, Debby called with a rudder peddle problem in the CAP 232 at the airport she was at. The problem grounded the plane. Our unflappable team mechanic, Len Rulason, was immediately dispatched to fix Hanspeter’s plane. Twenty minutes after he left, Vicki started up for her flight. Upon her run-up, she discovered a dead left magneto. (This violated the Chenoweth Second Axiom of Flight: “Never do a mag check away from your home field”). Vicki’s flight was scrubbed. Fortunately, there was a mechanic on the field. A replacement mag was located, and should be installed this morning. Len and Vicki are on the road as I am writing.

Len arrived at Debby’s field, identified the problem, and then went to a local bicycle shop for parts. Evidently, the CAP 232 used a part on the rudder peddles that is also used for bicyclists to attach their shoes to the peddles. Who would have guessed? Len finished the fix in the hotel bar last evening. Hopefully, Debby and Hanspeter are now able to get back in the air.

At 1700 hours today, the mandatory pilots briefing will be held at the field. The order of flight for the Qualifying Program will be drawn. At 2015 hour, the Opening Ceremonies will begin followed by dinner. Tomorrow, the first competition flights are scheduled to begin. Everyone is excited to begin the WAC.
Posted by Norm DeWitt at 12:28 AM