Today started out with the usual fog and now the daily Starbucks visit. However Debby and I had to wait about 20 minutes for the 9:00 opening. Norm, our Team manager, must have read the blog, as he went to McDonalds this morning for his treasured orange juice, the British version with “no bits”, and an artery-clogging Egg McMuffin.

We headed out to the airport a bit later than normal, due to the request for no flying allowed before noon. Shortly after hitting the main road to the airport, we discovered we were following this truck which was moving quite fast on a single lane road. I told Norm this was a great thing; this guy could be our lead anytime as we would no longer have to worry about oncoming traffic. Being a tanker truck, we assumed this might be the source of the missing 120W oil for Hubie’s Sukhoi, however it turned off before getting to the airport. 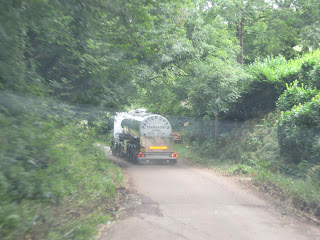 Hanspeter was up first this morning with about a 1500 foot ceiling which got up to 2000 by late afternoon, but didn’t allow any of us to fly a full sequence, just figures that had to start at 100 to 200 feet. We all should have been given air show waivers for today, we earned them. Just after the first rotation, we were informed that the flying must stop at 5:30, so we switched to tightly controlled 10-minute slots. Jeff, being the last in the rotation, gave up his slot to keep within the time limit.

Robert had some airplane issues today. He and Len tried to figure out the problem. Finding nothing wrong, Robert flew the second rotation. 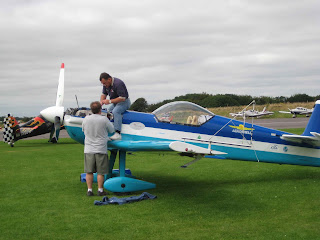 Today was a real zoo, aerobatics, normal arrivals, and parachutists. All of this really gave Brendon a workout as the radio (unicom) guy today. 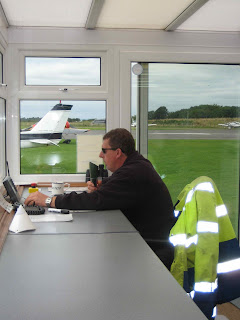 Here he is on the job at about 1:00, looking quite fresh. 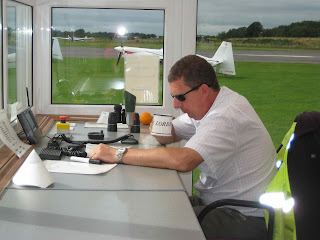 This photo was taken at 4:20 pm. He said that was tea, but after today it was probably something a lot stronger. Though the photo doesn't show it, he was looking quite disheveled.

With Brendon on the radio, this left Curtiss to handle the phone calls, otherwise know as noise complaints. 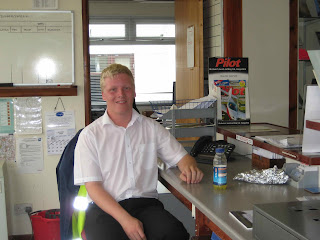 Here is Curtiss when not on the phone.

Richard is the third guy here and he handles the phone and collection of landing fees when Curtiss is manning the fuel pumps for us. Nicolette had the day off.

Richard told me that usually either Saturday or Sunday are busy days here, but with the weather not so good yesterday, more people flew in today. There were 14 visitors to the airport today but last weekend there were 75, split evenly between the days. Thankfully for us and Brendon, we were not here yet