by Vicki
This morning I am typing from the hotel lobby at an amazing airport called Sywell. This airport is unreal, the runway is a huge grass strip and the facilities look like they are from the 1940’s. I am including a few photos here to get the point across. As I sit typing, sipping tea and trying to find a magneto, I am listening to Ella Fitzgerald and Frank Sinatra played in the background. 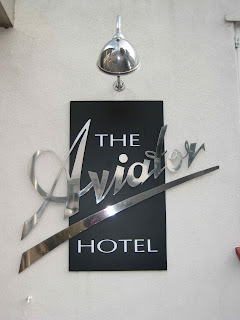 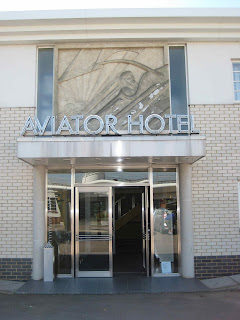 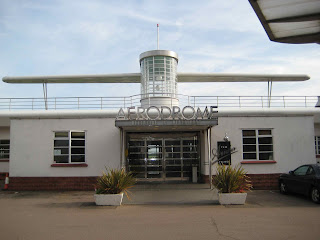 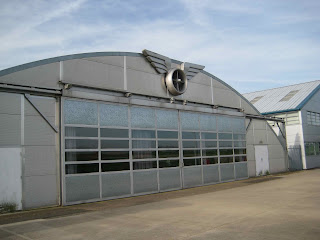 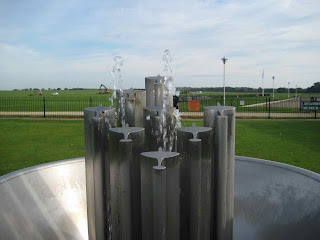 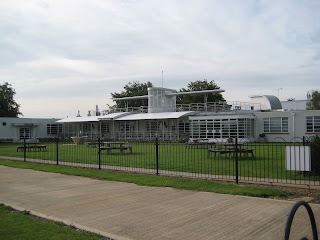 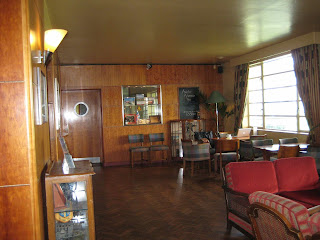 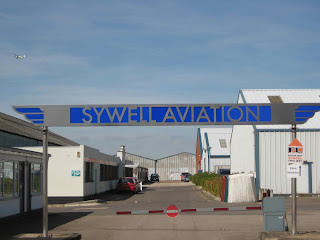 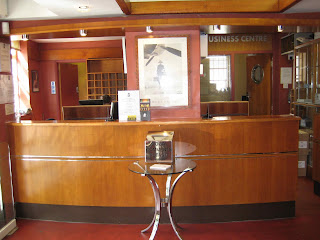 The British team is still here practicing and it was nice to see them. They are aware of my magneto problem and have offered some possibilities for me, which is great.

Len, Hanspeter and I headed out very early this morning for Sywell. Hanspeter/Debby’s plane is here and Len will be fixing the broken rudder pedal and then he and I will head to Conington to work on the Edge. Both mags are off and are being taken to a shop that overhauls Slick mags. The local mechanic at Sywell here offered to pull two new mags off an Extra he has sitting here and give them to me, but only the right one matches the Edge magneto. 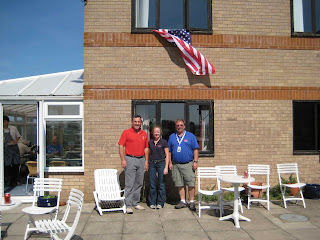 Here is a photo Julie took of Robert, Me and Len outside the terminal. Julie flew the US flag for us today; Robert announced is as we were reclaiming the place, formerly home to the 457th Bomb Group and known as Glatton. 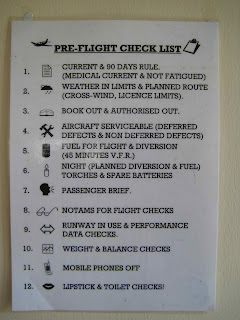 Arriving this morning, Robert flew a couple of practice flights in the area and noted that once he was in the pattern with all women. He also noted this sign in the FBO:

Len, Robert and I are sitting at Conington waiting for a new mag to arrive. Turns out the right magneto was defective, not the left one. In retrospect, the magneto off the Extra would have had me flying by now, but we didn’t know. Fortunately, Don (the local mechanic) decided to pull of both mags and send them in. Turns out the shop here had three left mags, but no right mags (they are different). A mag is being driven from London by courier. We expected it before now but...

The right mag appeared around 3:30 pm and went on promptly. A test run of the engine revealed no change in the engine. Robert decided to go back to Silverstone where he would just be slightly late for the 5:00 pilot briefing. The engine ran slightly better at higher power, so Len suggest I fly it around the pattern, which I reluctantly did. The engine ran ok, but three cylinders were quite hot. We did another run up on the ground, but the results were the same. So we decided to get a new left mag and try that. While waiting for the mag, Len and I went out for a quick sandwich at the local pub. The new mag arrived around 6 pm. 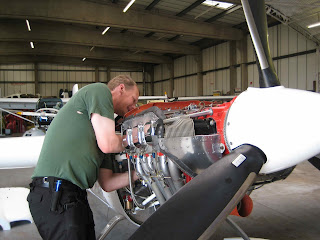 Here is Joe putting on the magneto.

After putting on this mag, we had high hopes for a smooth run. An engine run revealed that once again, the engine was not running well on the left magneto. Now we were getting stumped. Len decided we should check the fuel injectors, so they were removed and small bits were found in a few of them. Robert previously found some contamination in his fuel, so we sumped the tanks and found the same thing Robert had. We drained several gallons of fuel, pushed it outside and started it up. We were thinking positive, but the engine still would not run properly.

After more thinking, our next step was to remove the p-lead from the left mag, being very careful not to bump the prop. An engine run this time found a perfectly running engine. At least we were getting somewhere. Len decided that having the plane in the contest hangar with the p-lead off was not a good idea. The planes are moved about to get others out and this was not the safe way to go. Joe hooked the p-lead back to the magneto and we kept working.

Our next task was to suspect the ignition switch. Don took the ignition switch out of his airplane. Len and Joe replaced the ignition switch and Len hopped in to try it. The engine ran horribly, just like before. Now we were all stumped. However Joe suggested we remove the wire to the Slick start shower of sparks. Len started the engine and it ran perfectly. It was 9:00 pm and Don, Joe and Henry were still there helping. We had finally found the problem.

In the morning, we will remove the left mag and put the old one back on (so I do not have to buy two new mags), as well as the borrowed ignition switch. Len will try to start it without the shower of sparks and we will see what happens. After our discovery, we closed the hangar and everyone went home.

Len and I headed back to the hotel (just over an hour) were we were able to catch the last 15 minutes of the Opening Ceremony and share a creme brule Norm had saved for dessert.