It's mid-morning and the team is still at the hotel. We are scheduled to brief at 1300, and continue with the Freestyle at 1400. The weather looks OK. Yesterday, was a no fly day. England was forecasted to be hit with the remnants of hurricane Bill. It was blustery and wet, but not as bad as expected. The Team members elected to travel locally to see the sites. David and Martha invited Debby and me to visit Blenheim Palace, the birthplace of Winston Churchhill. It is a magnificent palace on beautiful grounds. We had lunch in the Palace and then took the tours. Afterwards, all of us were invited to Nigel Lamb's (Red Bull Pilot) home for refreshments and dinner. Nigel and his lovely wife, Hillary, were great hosts. We shared many flying stories (a few about Kirby), and several glasses of wine. 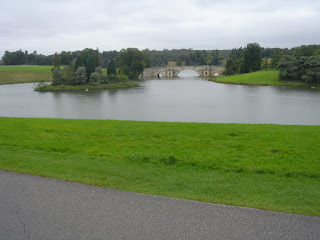 Some of the beautiful grounds at Blenheim Palace 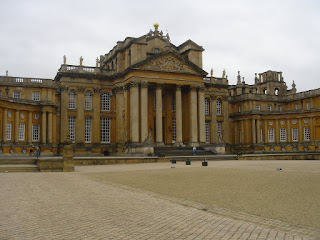 Nigel and Hillary, thank you for a fantastic evening!!!!

We then returned to the hotel, and called it an evening.

As you may have already seen from the scores, your team did a very good job in the Q program. When the results were in, Jeff was in 4th place followed by Goody in 9th, Michael in 14th, and David in 15th. Debby, Hubie, and Robert each flew well, in my opinion, but the judges disagreed with me.

On Tuesday, we were able to fly the top 11 pilots on the start of the freestyle. Then darkness ended the day. We will restart the remaining pilots in a few hours. Unfortunately, Goody had more than 1000 penalty points during his flight. He had some outs, but the radar tracking system being used to track penalties captured him low on several figures. You just can't push the bottom of the box in international competition, especially when the tracking system is accurate to within a centimeter or two.

Now, our team is going to need some help from the British Team, and a great flight from Jeff in order to bring home a team medal. Jeff has been flying very well. I know he will do well for you.

Wish them good luck. More later.
Posted by Norm DeWitt at 2:33 AM