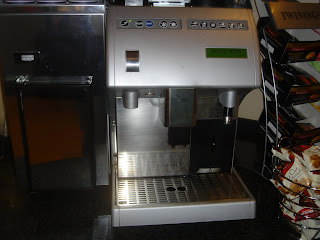 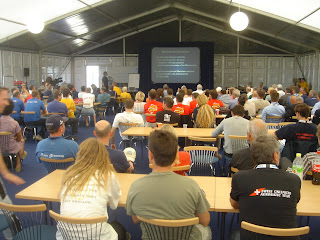 The morning briefing began promptly at 8 AM in the briefing tent. Clouds were not an issue. The winds at 500 meters were within limits at 11.3 m/sec. The warm up pilots were launched at 9 AM. Then scud started coming into the box. A few moments later light rain began to fall. Now, we are on a weather hold, and it is raining. The forecast for later today is for isolated showers. It's not looking all that well, but tomorrow's forecast is more promising. Oh, well, weather can always change. Now you know why it takes 10 days to fly a WAC. If this weather keeps being uncertain, the team and I will need you to send more money in large denominations.
At the top of the blog is a picture of a coffee machine that is in the lobby of the hotel Also, there is a similar machine at the Briefing Tent. It is really cool. There are about nine different buttons that you can press to select coffee, lattes, capucino (sp?), etc. You can also make your selection double strength. The process takes about 10 seconds, and it tastes pretty good. Way cool. My coffee group at the San Carlos Airport needs one of these.

I will update this blog later today as something happens.

Just prior to the 1PM lunch break, we were able to fly the warmup pilots and contestant #1. Lunch was from 1300 to 1400. The next pilot was in the air by 2 PM. When I left the airport about 6:15 PM, we had flown through Goody Thomas #21, and the plan was to stop at pilot #28 and 7 PM. The contest is finally underway, and there are happy pilots at Silverstone.

Two of the US pilots have flown: Robert Armstrong and Goody Thomas. Both flew very well, but Robert received a 150 point penalty for not doing three wing wags on a free break. The scores will be posted and you can go to http://www.wac2009.com/ and see where everyone stands. You should also be able to link from this site, but I have not had an opportunity to check it.

Tomorrow, we may complete the Q program. Vicki will be the first US pilot to fly. Michael next followed by the rest of the team. Wish them well. They are going to make us proud.
Posted by Norm DeWitt at 2:18 AM