It has been a crazy stay so far as you can tell from Norm and Vicki's posts. Weather, noise complaints, and maintennance issues have kept us from being able to fly as much as we would all like, but finally we are all in one place looking forward to the contest. Since Vicki and Len were working on the airplane last night they couldn't attend the opening ceremony and you have to hear about it from me.

After the draw for order of flight and getting the early airplanes ready for the morning start, we all quickly cleaned up for the opening festivities. 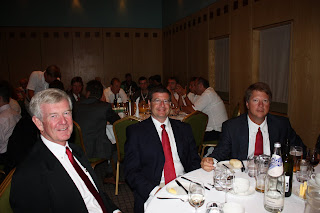 The ceremonies began with mess beatings, not what you think (Norm is still ok). It really was a great drum corp (The Corp of Drums) which marched in and put on quite a show. 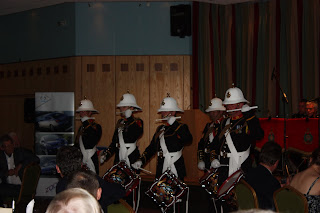 After some welcoming remarks by contest director Steve Green, we were served a wonderful dinner complete from the Lamb to the creme brule. (So much for trying to lose weight) The Band of Her Majesty's Royal Marine of Collingwood played throughout the evening. 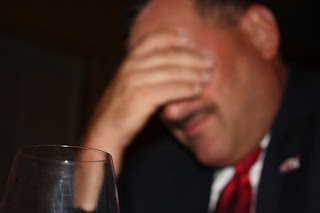 Robert sleeping? ... or is he 4th to fly tomorrow?

After dinner, more welcoming remarks from sponsors, Jeff Zaltman of Flying Aces, Richard Phillips of Silverstone Circuits, Ltd., and Robert Heygate, Deputy Lieutenant of Northampshire. Nick Onn read the Competitors' Pledge and the competition was officially opened by Mike Heuer. Flags were raised and anthems were played. The finale for the night was dualing buglers, and what a performance! Everyone is looking forward to a great contest.
Posted by Debby at 2:29 PM