August 17 - Farewell Dunkeswell, Off to Silverstone

Today we arrived at an overcast airport and started flying about 11:30 or so with Peter from Slovenia. Next up was Jeff and during Jeff’s flight, Brendon the airport manager pulled Norm aside and told him the flying had to stop. The locals had won and that was it for us. If we kept flying, the airport might suffer some repercussions from the community and no one wanted that.

Norm and Robert worked on alternatives with the contest officials, while the rest of us had lunch, fueled up for the trip to Silverstone and paid our bills. With fees for the hangar, landing and box entry fees (yes, a charge each time we flew in the box) plus the fuel and oil bills, we left quite a mark on Dunkeswell. I came in at $1100.

Finally we received word that we could launch for Silverstone; the runway was marked and open for our arrival. Robert, Goody, Jeff and I flew in formation to the site with Robert as lead. He had the most experience flying across
Europe, so we made him lead 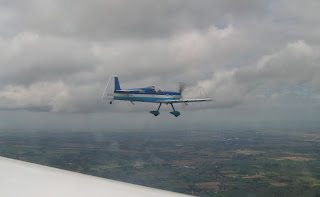 Robert in the lead.

We arrived in Silverstone and taxied to our shared hangar which are very nice temporary structures (there are three total). Robert taxied right in, followed by Goody, myself and Jeff. We won’t get to do that again. It also received a questionable look from one of the organizers, who asked Robert of the Americans always taxi into their hangar. Robert replied, “When they are empty.”

We didn’t have to wait too long before the rest of the team arrived by car. We were also informed that we would be given an alternate practice site tomorrow because of the poor weather and noise issues at Dunkeswell. Silverstone is a year-round race track where a Formula 1 race is held (though I am told perhaps no more) so cars are racing around us and we are in the center of the complex. It is quite an interesting venue. I will try and get some shots of the site.

Silverstone is about 35 minutes (with no traffic) from the hotel. We actually found it right out of the gate. We all checked into the hotel and registered for the contest. Dinner was served and old friends were met. Our team practice times are tomorrow morning, so it was an early night.