This morning started a bit later due to low clouds in Exeter (go figure). While Hubie and Jeff went to the hardware store, Goody, who wasn’t ready (with his suitcase arriving yesterday with fresh clothes for the first time in days, my guess is he was having a hard time deciding just what to wear for the day) stayed behind. Debby, Norm and I went to Starbucks. Here’s proof: 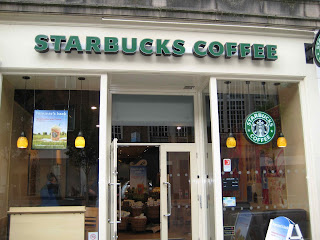 Debby and I enjoyed our skinny muffin and latte breakfast. Our team manager joined us for coffee, but had previously eaten the $24.72 hotel breakfast buffet (up from $24.68 yesterday with the exchange rate this morning) due to his penchant for “the exceptional orange juice.” I may ask the team members to contribute to the Team Manager Orange Juice fund so that we can go to the local grocery store and purchase a liter of OJ to stock his in-room refrigerator. After all, by expensing it to the team members, our manager is costing the team 10.24 liters of avgas per day (avgas is about $ 9.15 per gallon).

At 10:00 am this morning, I gave a quick call out to the airport and asked Curtiss how the clouds were looking, as it was beginning to break up in Exeter. His reply was that they had ground fog this morning. Lovely, as they say quite frequently here.

We eventually made it out to the airport round noon and visited for a bit, then Norm and Debby and I went to the local pub for lunch, where we met Martin the proprietor. The building he is in was originally built in the 1600s but has been added on to since. The food was amazing and not one of us ordered fish, but Debby had chips with her amazingly large but quite good Cottage Pie.

A Skybolt flew into Dunkeswell this morning with another great “G” number. Note the lovely ceiling. 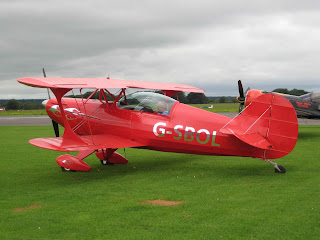 Finally the clouds began to give way (1500 broken) about 3 pm today and everyone got in a flight, with Hanspeter getting the last go at 6:15 before we shut down at 6:30. The airport asked us to stop at 6 pm for the locals, but since we hadn’t flown since Thursday, took pity on us and let us fly until 6:30. We worked in between arrival and departure traffic and skydivers, but it was all good and everyone was just happy to get back in the air.