Most, if not all, of you who have been following this blog are probably aware that we lost Vicki Cruse in an accident, yesterday. Vicki was performing her "Q" flight in front of the judges when she was unable to recover from a 1 1/4 snap on a downline. The plane crashed on the grass inside the racing circuit. No one on the ground was injured. Assistance was at the site moments after the crash, but the impact was not survivable.

Many of the competitors from around the world witnessed the accident. All are heart broken. Many have offered their condolences to the team and Vicki's family. All flying has been suspended until an investigation has been completed. The team members have met with the local police and the British Air Accidents Investigation Branch.

A meeting of the team managers was conducted this morning, and all voted to continue the contest in Vicki's memory. I know that Vicki would have wanted the contest to go on. The contest organizers will restart the contest on Monday afternoon, weather permitting. Due to other Silverstone commitments, there will be no flying on Wednesday and Thursday. The contest will be shortened, and most likely will include the results of the Q program and the Freestyle. The 4-Minute Freestyle will be flown on Saturday.

I have had the honor to have known Vicki for 14 years. Both of us flew Christen Eagles in competition, and later, the Edge 540s. We traveled to contests from California, Oregon, Washington, and Arizona to Nebraska, Oklahoma, Michigan, Wisconsin, and Texas. She flew contests in many other states, in addition. I will never forget the memories of flying on her wing tip to or from a contest, meeting new friends, and seeing old friends. Vicki was an extraordinary person. She was bright, street smart, unassuming, and possessed a twisted sense of humor. Many of you know how much she enjoyed pulling a prank on any one of us. I will miss her, greatly. I feel very lucky to have been one of her close friends. I am sure that you share my sentiments. 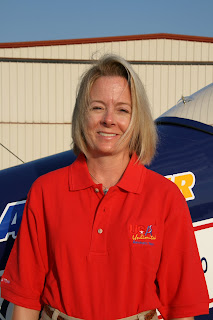 Good bye my dear, dear friend
Posted by Norm DeWitt at 7:51 AM